Q: What do you get when you merge hero’s personalities into a teacher?

A: Basically all the hero-teacher in My Hero Academia‘s universe.

Hero teachers are something of a noble profession that is made more noble. And like any great power, there comes a great responsibility. They are to educate and inspire the students to become a hero that is strong physically and mentally, and to be liable on any harm done on the students by protecting them right until their last breath. They are the unsung heroes that don’t shine much but is very important to the whole foundation of My Hero Academia.

There are A LOT of such heroic teachers in the universe, but one stood out the most, and it’s none other than the homeroom teacher of class 1-A – Shota Aizawa. And so here are some of his admirable characteristics!

He is first established as a strict teacher that would expel at least a few students from his class each year just because he doesn’t see the talent in them. He could be as straightforward as he can because he wants them to learn from harsh truth rather than sweet lies. ( also because he’s lazy to make up lies )

He evaluates the students and tells their weakness straight away, one of it being Deku that initially couldn’t punch without constraining his arm. He points out the obvious flaws and like any great teacher, he doesn’t stop there. He motivated Deku to improvise and come out with his own idea rather than giving the answer.

Which is why this is a really good characteristics that I admire. It shows that you actually want to give a constructive criticism and that you care about him/her rather than just brushing away the thing with a generic reply.

#2 He protects, and he protects.

In the attack at USJ, he took the initiative to charge towards the hording villains while requesting Space Hero, Thirteen to protect 1-A class. It’s a simple yet efficient act that can boost the whole class’s confidence on him and ease their uneasiness at the same time. Two birds with one stone. And when he is on the edge of dying in the hands of Nomu, he pushed himself beyond his limit for his one last action that protected Tsuyu, buying enough time for One Might to rush there.

And he risk his life doing so not just once, but again and again. 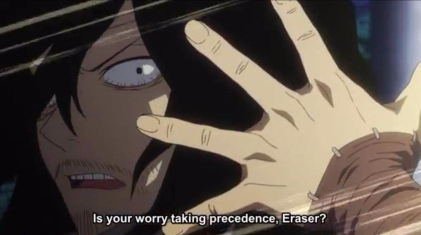 In the training camp, he rushed out as soon as he heard the attack by villains on the separated students when they are having fun with the “scare” event. In fact, it almost cause him his life because of his predictable action that prioritize his students.

Up to this point, it’s an inevitable fact that he’s looking after the students in the stand of their parents, worrying about them and caring for their well-being. Because when the crisis struck, the best and worst of humans are brought out. Like any heroes, his body moves before he has a chance to think it through. It’s almost like an instinct, a hero’s and a teacher’s.

A cold facial expressions and sleazy appearance that lights up whenever something interesting happened. It’s almost like describing a “tsundere“, an old one. He is the definition of dull and plain, giving advices with a deep tone and always seems to be taking his emotions out of everything. On the surface, he’s just an ordinary teacher that is obliged to fulfill his job and he seems to hate doing it.

But deep down, he cares for each of his students and understand them better than any teacher, yes, including All Might. He would even go to a great extent for the students. For example, he authorized the permission for students to fight back in the camp and is willing to bear the responsibility of the repercussions so that they won’t die, in the worst case scenario. 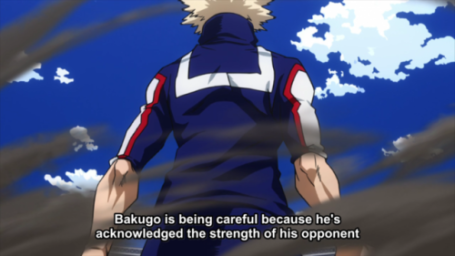 If I could pinpoint one thing that he has common with parents, it would be faith. Faith is like an eternal promise that didn’t just pop up and can be established right away. It takes time to trust someone and he’s spent most of them in training the whole class individually before the exam, observing their lowest and peak performance, the way their teamwork shines in crisis and most importantly, their passion and strength to push through anything ahead.

This is why in their provisional exam to be a hero, even when the odds are against 1-A, he trust their skills to emerge and achieve success. He believes them, which it the strongest connection there is between a teacher and a student, a hero and a hero.

This is further emphasized when there was a speculation done on Bakugo with his aggressive and unstable behavior, that he might join the villain team. He stood up, ignoring the provocation by the journalist and defended Bakugo. He believes that Bakugo is the one who is trying his hardest to be a hero, and although his attitude is a bit fiery but that doesn’t stop him from thinking rationally when chaos struck and it certainly won’t change his conviction. And this was shown to meant a great deal to Bakugo’s mother which later allows him to stay in the academy’s dorm under his care.

Remember when I said he will take the responsibility he promised? He did. Although he’s a man of few words, but when it comes to the things that he should do, he’s not afraid to take the initiative to do so. When all is said and done, he bears the responsibility of failing to protect some of the students under his supervision. And as much as he hates to be on the middle of attention, he took a deep bow like a hero in front of the news media and accept his failure as a teacher despite giving everything he had. 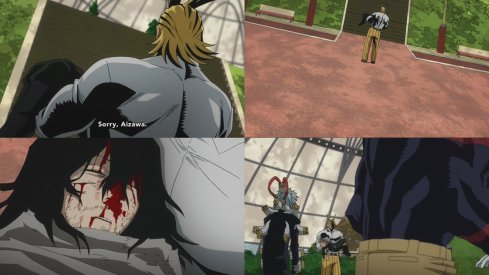 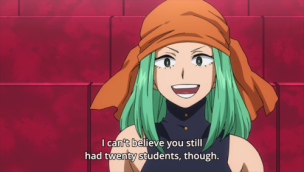 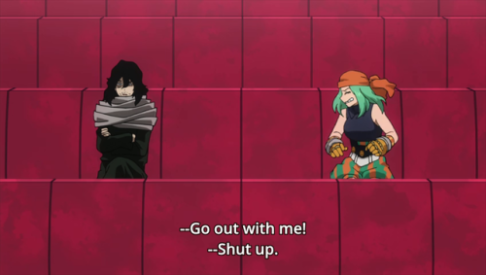 All the more reasons to like him, extra screencaps with the moments that I enjoyed and a gif with feels! Is he really that honorable or is there something else that I missed, perhaps mentioned in manga? Do let me know! As always, thanks for reading!

Follow Anime as a Cup of Tea on WordPress.com
Join 159 other followers