If you were to google ‘happiness’, you’ll probably see a smiley face. A common thing is that, the sense of happiness is often described to emerge when we are really enjoying something. It covers a whole range of positive emotions, including joy, pride, satisfaction, gratitude and much more. However, I won’t get too deep into the psychology part of it but instead just wanna share out some anime that I’ve found has subtly gave a shape to happiness.

The second season of 3-gatsu no Lion was the one that made me realised this. Being an anime that deals with depression, it made me realised the secret to happiness that it was portraying. It’s a contradiction to solitude and it roots from the dreadful loneliness that everyone had. It’s the hidden power of connection.

Yes. However anti-climatic as that might have sounded, every smile and laughs happen when one is being connected to others. Once you’re associated with others, the bud of your relationship starts to grow to become more fruitful. Be it a warm family, a precious friendship, an unforgettable romance or simply the act of giving something to a complete stranger. They all make up the formula to happiness.

Connection makes this happiness possible and these anime, in one way or another, embodies it in various shapes and forms.

“ A life without pain is meaningless. That’s because no one can gain anything without sacrificing something. But by enduring that pain and overcoming it, one shall obtain a more powerful, unmatched heart. A FULL METAL HEART.”

Fullmetal Alchemist: Brotherhood is the prime example of connection, and it’s done a great job in this by changing enemies into allies, and allies into family. The story has a different portrayal of the bond nourished between the Elric brothers – with a single promise. It will be a long journey, but once you have seen their story, you’ll never forget about it. ( Rated ‘F’ for family )

“ I’ll go, then rub in the faces of everyone who said I couldn’t.”

A Place Further than the Universe is a story about how four high school girls that has remained stagnant their whole life, decided to take that one step to Antartic. It’s a heart-warming and heart-wrenching original anime series that depicts more than just cute girls doing cute things. They takes the connection of the heart and action to a whole new level, inviting you to a journey to discover yourself. ( Rated ‘I’ for inspiring )

“As long as there’s someone who remembers me, I won’t disappear.”

Noragami tells the tales of a lonely god that collects 5 yens for each small errands he did, so that he can save enough to build a shrine. Though phrasing it this way makes it a bit underrated, but as the tales progress, he will make more and more connection with others. And eventually, one connection that would make him cry and smile like he never did before. ( Rated ‘E’ for extremly enjoyable )

“They come without asking, and then they leave just the same. But once you meet them, even if nobody ever knows it, that encounter will change your life for the better.”

Natsume Yuujinchou holds the greatest bittersweet stories of youkai out there. Ever since he was young, Natsume has been this unapproachable boy that is ostracised by both his relatives and his friends. He knows the meaning of loneliness deeper than anyone. That is, until he discovered a ‘Book of Friends’ from his grandmother’s belongings and in his high school, begun to make real friends he can truly count on. It is his connection with others that makes the happiness he obtained much more satisfying and delighting. ( Rated ‘M’ for melancholic ) 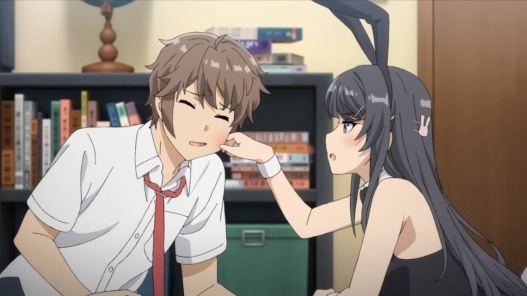 “You’re having lewd thoughts, aren’t you?”

Rascal Does Not Dream of Bunny Girl Senpai is like a compilation of connections made by resolving these ‘Puberty Syndromes’ around the characters. In a way, with the help of Sakuta and Mai, the characters are forced to resolve the hidden feelings that they have harboured deep inside their heart. It’s a story on taking the courage to face your own ‘syndromes’, and to simply connect back to your own desire – to be yourself. ( Rated ‘R’ for refreshing )

Chihayafuru makes this quote resonates so true with ones who are doing their very best to reach the top. In a story world where a card-playing sport known as ‘karuta’, it is the main characters’ efforts that connect them to each other. Doing the things they don’t want to, and things that they love are their drive to push forward and grab that success they’ve been aiming for. It’s just amazing what Chihayafuru has accomplished, but is now reaching a finale of its third season. I’d recommend this if you want to see a memorable connection between teamwork and passion. ( Rated ‘P’ for perfection )

“I want to believe that memories, even sad and painful ones, should not be forgotten forever.”

Fruits Basket is a story full of lessons and tales to be cherished from. It depicts how a sensitive yet cheerful girl is around the Sohma family members which consists of 12 zodiacs. She is the one who connects them, with her empathy that brings us to diverse and painfully beautiful stories. On a side note, season 2 is coming soon in spring! ( Rated ‘H’ for heart-warming )

Cautious Hero: This Hero is Overpowered but Overly Cautious is an isekai of a hero that overly prepares everything when he has the chance to. It’s a comedy on the surface, but has a lot more in store to take you on an unexpected journey of laughs with their many facial expressions. It hooks you with an emotional connection, and then take the comedy that it has presented to another level. ( Rated ‘S’ for surprising) 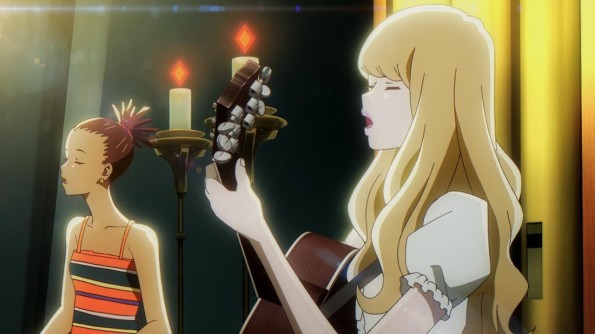 “Living things need not just nourishment for the body, but for the soul as well. Beautiful things and beautiful expressions. They’re vital to the soul. Without them, the soul withers.”

Carole & Tuesday is a breathtaking musical anime. It’s a story of two girls chasing their dream to be a musician in the world where AI-synchronized songs has dominated majority of the music industry. It is this their love in creating music that connects them and prompted their journey to do things that they are happy with. The studio, Bones has done such a great job with the soundtracks and the art, making their emotions more conveyable through their expressions and songs. ( Rated ‘S’ for Sweet! )

Zombieland Saga is a lot of things, but in essence, it has comedic moments that are right on point, and it’s fun. It’s a story of a group of zombie girls fighting to take every chance and every breath they can, to save Saga. Their manager, on the other hand, has a voice actor ( Mamoru Miyano ) that seems to be having the time of his lives playing this character. He is the one guy who can connect and bring out the best out of the girls, to tell the world that they are alive and spread that happiness to their fans. It’s an entertaining anime that is just good as it is. ( Rated ‘K’ for Kotaro )

So, these are my recommended anime that has quite a great approach on the pursuit of happiness. This list is purely objective as there are a lot more anime out there that can inspire and make people smile, but nonetheless, I really did enjoy these to my heart’s content and I hope that you would, too.

As always, this has been fun. I’m Ethan-underscore-zero-seven from Anime as a Cup of Tea advising you to stay at home, and watch anime. Thanks for reading.

One thought on “RCMD: 10 Anime That Shaped Happiness”

Follow Anime as a Cup of Tea on WordPress.com
Join 159 other followers